“Too many of us leave this world with our stories untold.” 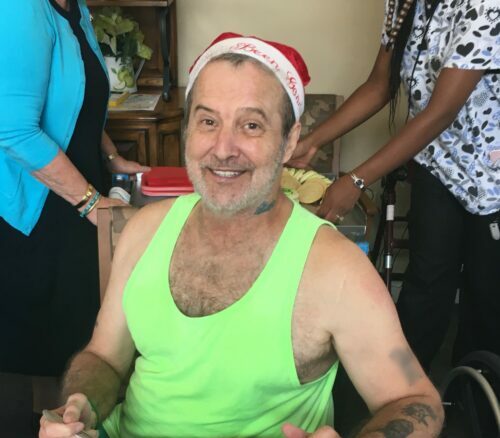 Lover of funny t-shirts, milkshakes, and making others smile…

Richard had a one-of-a-kind personality that lit up the halls of the Abbie Hunt Bryce Home in 2018.

Richard had a hard life, starting early in his childhood.

Growing up in a rough part of town with an impossible to please father was hard on Richard. Punishments were harsh and frequent.

His need to belong and his tough childhood lead to him sneaking sips of his parent’s adult beverages as early as six years old. This would ultimately lead to a serious alcohol addiction and liver cancer that would cost him his life.

Richard was incarcerated, married and divorced several times, and lost both of his children—one to cancer and one to a shooting—before deciding to become clean on June 10, 1999. He described the date he made the decision to change his life as his “birthday.”

After choosing sobriety, Richard dedicated his life to helping others do the same.

He joined Alcoholics Anonymous and became a sponsor. He spent his time volunteering at local Alcohol and Drug Addiction Treatment facilities.

Even after receiving his cancer diagnosis and learning he only had a few months to live, Richard never touched alcohol again.

Richard came to live at the Abbie Hunt Bryce Home in March of 2018. While his early life was characterized with addiction, loss, and pain, he ultimately decided to change his life to begin serving others and made it his life’s mission to make others smile.

He used his story to make a difference.

While at the Abbie Hunt Bryce Home, Richard kept a journal by his bedside to record his final thoughts.

“Too many of us leave this world with our stories untold.”

Richard was also featured in a write-up by the Indy Star. Read the Indy Star article here, or view all of Morning Light’s media mentions.